How to Choose a Shower, Shower Head and Accessories

This is a small guide for choosing a shower and accessories for it. The type of a shower that you choose partially depends on your household water system. If hot and cold water is supplied from storage tanks at equal pressure a mixer shower would be the most economical option. Many showers are designed to cope with differing water pressures, such as stored hot water and cold mains water. If you connect mains water to a shower, you must fit a double seal check valve on the mains supply pipe to prevent back siphonage. Some showers come with built-in check valves. Specially designed systems are required when hot water flows from the mains via a multipoint heater or a combination boiler: check installation requirements with the shower manufacturer.

Shower accessories are important features of any shower, from the showerhead to the valve. They give the finishing and defining touches to your shower. A shower spray combined with a bath mixer tap provides a shower for little more than the cost of the bath taps, and no extra plumbing is involved. The temperature is controlled through the bath taps, which may not be convenient, and will be affected by water being drawn off elsewhere in the home.

An all-in-one shower usually incorporates a powerful electric pump that boosts the rate that hot and cold water is supplied to the showerhead from storage cistern and hot water cylinder. A power shower is unsuitable where water is supplied from a combination boiler under mains pressure. Removing waste water from a power shower fast enough can be a problem. The shower tray must cope with around 27 liters a minute, so it is probably worth fitting a 50mm waste pipe. 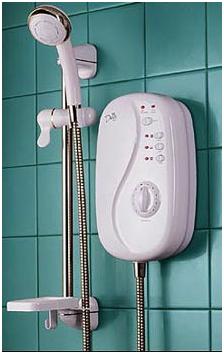 Safety Warning: A showerhead on a hose should be fed through a retaining ring on the wall of the shower. This prevents the showerhead from hanging in standing water in the bath or shower tray beneath and avoids potential contamination of the mains supply.

A wetroom consists of a WC, basin and shower area. A shower tray or shower enclosure are not fitted and water drains through a central drain set in a sloping floor, so the whole room must be waterproofed. This is not a bathroom DIY exercise. Wetrooms may have a powerful thermostatic mixer shower and body jets or a shower tower.

It is a wall unit which is plumbed into the mains cold water supply and is heated by an electric element. The controls allow either less water at a higher temperature or more at a lower temperature, so the spray is weaker in winter when mains water is colder. Some models have a winter/summer setting. Designs fitted with a temperature stabilizer cannot run too hot or be affected by other taps in use. The unit must be wired to an electric power supply meeting Wiring Regulations requirements. This type of shower can be installed where a shower mixer would be illegal. A tank-fed pumped electric shower is good where mains water pressure is too low.

These are wall units with hot and cold water supplies connected to a single valve. In a manual mixer, temperature and volume are controlled separately or by one dial. Thermostatic mixers are more expensive. Their temperature control has a built-in stabilizer and therefore the water cannot be extremely hot or cold. Computerized models have a control panel for programming the temperature and flow rates and can store the data for each user. Provided water is not supplied from a combination boiler under mains pressure. This type of shower can be connected to a pump to give power shower performance.

It is a wall unit that incorporates a thermostatic mixer shower with a number of adjustable body jets. Tower units also have a fixed shower head and a hand-held spray, and may be designed to fit into a corner or on a flat wall. Some can be installed over a bath while others are made for cubicles or wetrooms. The majority of them require a minimum ceiling height of 2.2m. A pump is usually required for boosting water pressure.

Spray roses showerheads - may be fixed or part of a handset on a flexible hose. The simplest ones have a single spray; multi-spray showerheads offer a choice of spray patterns selected by rotating the outer ring on the rose. Large diameter single spray shower heads that offer a rain-style shower are also available.

Shower trays - GRP-reinforced acrylic shower trays are easy to handle and not easily damaged. A reconstituted stone or resin shower tray is heavy, stable and durable, but the floor must be level before it is installed. Shower trays come in sizes from 700mm square and are usually 110-185mm high; low level 35mm trays are available for `walk-in' showers. Quarter circle and pentangle shower trays help to save space.