How to Replace A Sink Faucet: 19 Easy Steps

In this project, I'll start showing you the glorious AFTER. Here's our new bathroom faucet in all its pretty angles - left, center, and right. It's the Pegasus brand with satin nickel finish. I'm starting with the final product so as to encourage you to read this post no matter how much ugliness you'll see in the process.

I debated whether to show you the EWWW! and ugly side of changing the faucet but in the spirit of keeping it real, I decided to expose the truth. The numbered pictures show the step-by-step processes we undertook so I'll explain them in a numbered way, too. Here's the original faucet (I suspect this is the faucet since this house was built, which is waaaay older than me), and as you can see, the drainage assembly is already broken. That hole is magnet for my girls' basketball practice, using hair items to sink them in there. 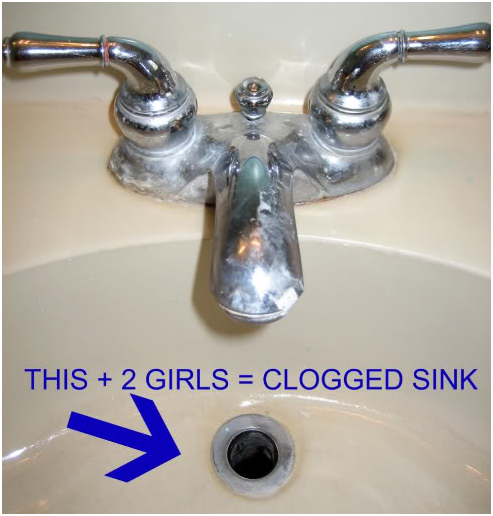 Yes, I admit, it looks so gross because the water just drained when I took a picture of it. The best remedy to unclog the sink, we thought, is to dismantle the pipes underneath it, and while at it, replace them, too. But why not replace that ugly faucet, too, huh? Why not? And so we did. But before we accomplished that mission, here are the horrendous yet fun steps (fun because my hubby and I get to spend 10 hours together talking and fixing it) we went through.

1. Hubby unscrewed, shimmied, and took out the pipes.
2. Old pipes are gone.
3. Hubby tried scraping off the blockage and slimy black stuff came out. He concluded that if it's still clogged up after we changed the pipes and the faucets, then we need to call the plumber because the cause is all the way down the main pipe.

4. Hubby pretty much spent 70% of working time in this position. It felt like we're doing a surgical procedure because conversation went on like this-
Mr. HOAD: Pipe wrench (hand spread out)
Me: Here (handing it to him)
Mr. HOAD: Screwdriver
Me: Here

and this looped til it was finished.

5. Finally, our efforts paid off because ugly faucet is out 🙂
6. New faucet coming in and here I am holding the hoses for the hot and cold water.

7. New faucet is adjusting pretty good in its new home.
8. Plumber's putty and pipes waiting for their turn to be used.
9. Busting this hard-headed rusting nut took so much time before it finally came off. We used WD-40, nope, it didn't do any good. We tried the heat gun to no avail. Only the old-fashioned combination of hammer and screwdriver worked!

10. Here I am holding the top part of the old drainage assembly while hubby was unscrewing the dreaded nut.
11. It's finally coming off!
12. Here's the culprit that held us back from moving forward to the next steps.

13. Hubby is fitting in the ring for the sink.
14. He is examining the drainage assembly that he has to install.
15. Mr. HOAD asked, "What is this gasket doing here?" I replied, "Why?" He said, "It's supposed to be under the faucet." "Uh-oh!" I uttered. Hubby had to undo everything he installed so this black thingy can go under the faucet. 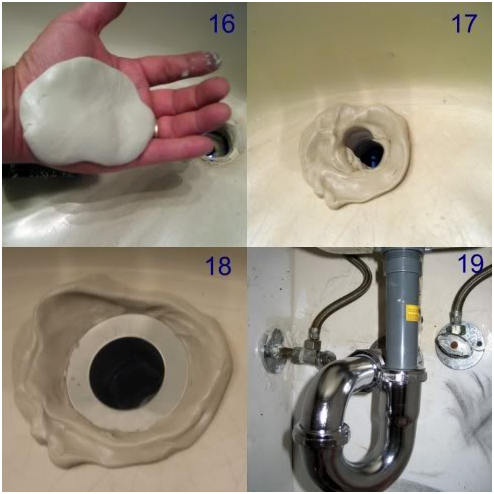 16. Plumbers' putty is very much like the playdough, except for the smell.
17. Hubby kneaded it to fit the hole where the ring is supposed to go.
18. Ring is installed.
19. New pipe and new drainage assembly are also installed.

At this point, hubby ran the water to see if the sink was still clogged. Yes, it was, so I had to call the plumber. He came and inserted this unclogging tool all the way down to the main pipe. It was interesting to hear the crunching and roaring sound but what a relief for me when there was no more accumulation of water after that. 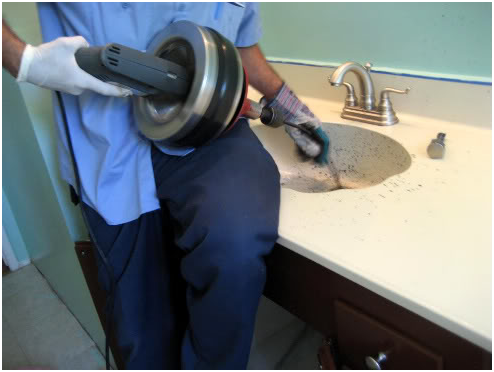 As a conclusion, no more clogged sink; instead, we have a fine-looking faucet.